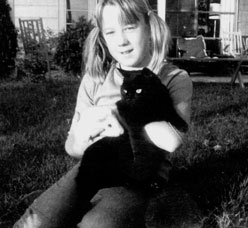 
I hope that everyone will not be bored to tears by all of this but I have been asked so many times about how I got started and where did the name Blue Rat come from that I thought I would write this down.

In the 1970's I had to design a professional business card for a project in a night school printing class I was taking. I had to make up a name for the business so I called it Blue Rat. This came from a story my dad wrote when I was little called The Rat Machine. Since the card was actually going to be printed I decided to use my real name and address. The card came out cool so I decided to use it to start a business.

Not really sure what to do because I had a full time job working in a factory on the second shift, I just decided to make things. I was given a new sewing machine for my high school graduation present in 1972 so I decided to use it. I made anything I could think of. I made dolls, custom patchwork quilts and artistic wall hangings, pot holders, place mats, baby blankets and far out clothing for future rock stars to wear on stage. I made up little blue tags for these items with the name Blue Rat on them. The one thing I did not make was money. 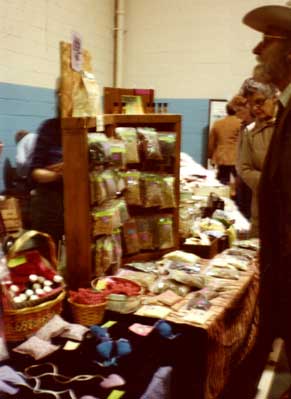 My favorite pastime was exploring the local woods and meadows. I knew where many wild plants grew and had studied how to use them so I decided to try and sell herbs as well. I made herbal baths and sleep pillows with chamomile and lemon balm, little sachets with lavender and mint, pine and cherry scented necklaces, and tiny velveteen bears stuffed with sassafras and cinnamon.

Catnip Heart
- from an early catalog

The funny thing was that while I loved the name Blue Rat and all of the things that I made not many other people did. I will always remember the woman owner of a fancy shop telling me that even if she did like my products, any customers she had would be horrified to see the word rat on them. She said rats and mice were nothing but disgusting dirty creatures. It made me mad and then sad. Not that she didn't like my name but that she hated rats so much. I always thought they were kind of cute. Mighty Mouse™ was my all time favorite little cartoon hero. I was on a mission. I was determined to get rats into the fanciest of stores without anyone even noticing. I made up a new name - Ratherbee. Rat for the offensive creature and herb for the plants I sold. I thought it sounded quite exquisite and refined. I made up new tags with the name Ratherbee instead of Blue Rat on them. Then a strange thing started to happen. People slowly started buying my products.

Now here is where the catnip business began. The year is 1980. One day,while exploring along the waysides, I found a wild meadow with ten foot high mullein plants here and there. I decided to investigate. There were all kinds of plants that I was familiar with such as burdock, yarrow, mugwort, thistles, great vervain, teasels, melilot nightshade and wild strawberries. There were mints, blackberries wineberries and goldenrods. I was in heaven. Then I spied some catnip plants. I had never found these growing wild before. So I picked some, took it home and dried it, and made some catnip mice to sell.

To my surprise, the catnip mice started selling like crazy. I couldn't make enough of them! Every time I would set up a table at a flea market the people who bought one the week before would come and buy three more for their friends. The next week their friends would be there. I had people showing up at my house that I didn't even know. People were sending me letters and pictures of their cats in the mail. 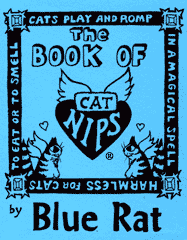 A few years went by. I started selling them to stores and from classified ads in the back of magazines. I created new catnip products that were easier to make than the mice. I decided to print up a little booklet myself called The Book of Cat Nips® on an old black and white copy machine. I used this as a catalog. It was just hand drawn pictures of Ratherbee catnip toys. It also had information about catnip, poems people sent me, assorted catnip trivia, etc. with a mail-order form in the back. Business was great. All thanks go to the rats and mice!

I bought a house in 1989 and started growing catnip myself. As the catnip grew it started attracting all kinds of big tom cats to my yard. I put up a high fence around it. They jumped over it. They would holler and fight over it all night long, not to mention chewing every luxurious plant down to a stub. I still picked all of the wild catnip myself and was driving hundreds of miles into farm country each summer to pick it. I was so attracted to the plant that I could spot a stand of catnip growing in the middle of a field through the windshield of my car while driving 60 miles per hour. I was falling down gullies and getting stung by all kinds of bees every time I picked it because bees love catnip too. The entire second floor of my house turned into catnip drying rooms with fresh picked catnip buds drying on giant screens hung from floor to ceiling. No lie! 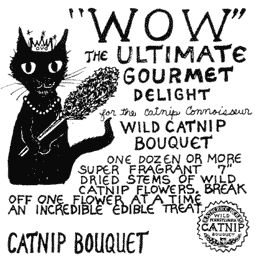 Over the years many things have changed. One of these things is that I don't have to pick and dry the catnip blossoms myself anymore. We have dedicated farmers to do that for us now. But the one most important thing that has not changed is that we make sure that every single catnip toy we sell is the still the very best high quality catnip toy that we can make.

We want to make sure your cats are happy - so every toy comes backed with a 100% satisfaction guarantee.